Whitney Houston: In Memoriam and in Praise of God's Work in Her Life 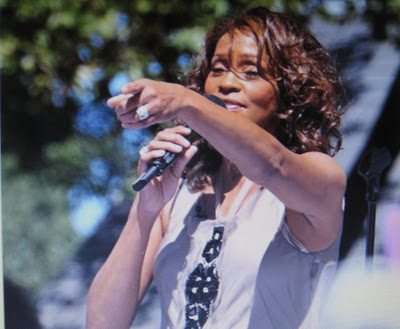 I had written about Whitney Houston for Technorati in October last year. I knew she was troubled.  Issues rose up in her life, then were quelled, covered by family and Houston herself. Too many prying eyes...too many ridiculing, envious hearts.

But if there were warning signs, only Whitney Houston could have realized what was happening. It is not for others to judge; it is impossible for others to know. We can only try to stand in another's shoes. And if we believe in the Lord, which Houston and her family surely did and do, then we must trust Him. Only He knows the purpose of our lives. He is the author and finisher of our faith. And the world may wag on, but He is the designer, and glory comes to Him through us.

That said, I've written this sonnet in remembrance of a beautiful and glorious child of God. He blessed her with his precious gifts. They will be treasured in our lifetime and beyond, because it is His joy to celebrate the goodness that shined the light of Whitney Houston. And through the grateful appreciation of her divine, anointed talent, I do believe many will be lead to the Kingdom of God.

This sonnet is dedicated to Whitney Houston. To God be the glory.

When you were born God's plan was set in place;
Your being not your own, the Tree of Life
Did hold you up and lift you to God's grace,
Though storms would come to beat you with their strife.
Though worldly, carnal lures would distract you,
Though fame and fortune waved their glittery hands
And beckoned you embrace them as "the truth,"
And follow them in snares of their commands.
But never did the Lord allow your fall.
And never did you cease your faith in Him.
You never let your soul be world enthralled,
Despite blind media's judgments of "your sins."*
With Him in Spirit, Whitney lives in Grace
And softly wins you to His love's embrace.

*Only God can judge us. And we are forgiven. So any talk of her "faults/sins," by anyone must be viewed as follows. This is probably someone who doesn't believe/hasn't accepted in his/her own life that God forgives; does not believe that God is love and does not believe in the Spiritual power of the Living God. Pray for that person/those individuals, if you are lead to. Then move on.
Posted by Carole Di Tosti at 2:20 PM

Dr. Carole!
I enjoyed this so much that I posted it to my facebook. Thank you so much. Whitney Houston and her music continues to be inspirational to me.
Dr. Chris Gelenter

Thanks, Dr. Chris. I appreciate your comment. I hear you. She was anointed and her songs will continue to be a blessing to us. I believe she is in spirit.

I think kindness must be your special spiritual gift from God. (one of the 9 gifts...I am still working on)

(PS
Sorry for the rant.)

What a lovely tribute. You have treated this with sensitivity and honor.

Thanks. You are kind. God bless.

Carole:
What a wonderful message. I think Whitney Houston's death touched many people in many different ways. Hopefully, someone can learn from this and it can stop another tragedy.

Hope so. If you think of it, send a prayer to her daughter. It must be very hard for her. Thanks for your good thoughts.

Wonderfully written. I was so touched by her funeral and the word that went forth to the world that in spite of her issues, she loved Jesus and because He paid the price for her sins He welcomed her into His presence as a child of His.

Absolutely! I completely believe that! It was an amazing going home service. I was so glad that the family consented to it being streamed. Very touching. Now, we'll just agree that Bobbi Kristina will be comforted by the Lord and family and maybe her father...will come to Christ...in a renewal. I'm sure he was raised in the Lord.

Thanks so much for sharing your love. God Bless. Will be in touch.
Ciao,
Carole