Surrounding Angels: Happy New Year 2012 to All in My Sphere 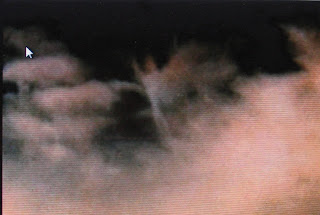 Unseen in Spirit, moving light speed grace
The angels carry Christ's redemption joys.
They minister to those, their soul's laid waste
By dark devouring torment, hope destroyed.
A kind uplifting word, a simple phrase,
And whisk another element appears.
Distracting cruel thoughts injecting praise
Into sad minds dispelling darkling fears.
It's thought each person has a guardian,
Just one angelic being who safe keeps
His human host from lurking evil's den
And preying hordes who'd maime and kill the sheep.
But I submit it's countless angels who
Do keep us well and whole and loved, Christ's Truth!
Posted by Carole Di Tosti at 5:06 PM 4 comments:

Mockers Before Christ's Redemption: Must We Suffer Them? 5/19/87

On my journey through religion's byways, and scandals in 1987 at the Full Gospel Tabernacle and other churches I attended, I encountered a motley group of individuals and was forced by the Lord to discern after the Spirit, not after the flesh, which, of course, deceived. There were those in church who apparently "loved" the Lord, but also mocked His truth and commandments with their behavior. Could I judge a righteous judgment against the church, the "believer"? The scripture says I can. Did I? I was mocked and not understood, walking after the Spirit, a Christ representative. I wrote this sonnet to cope. And eventually, the Lord led me onto another unexpected path.

Oh Lord, the scorners, mockers always there
Who would upend Your loving, generous self.
As such their darkness would my soul to wear
So they could justify their evil's stealth.
Do not receive your Being, and ignore
The coming of Your light to help their cause.
Such haughty, errant crassness won't repent.
Instead they'd mock the Lord and Calvary's cross.
As they feel nothing is their worth in life
Know not He is their source, He is their light.
They choose to cause self-torment, no respite
From inner turmoil, hate and inner strife.
Oh Father fuse their souls with thy Love's heart,
And separate them from the Dark One's arts.
Posted by Carole Di Tosti at 1:43 PM 2 comments:

God vs. Satan: Two Sides of One Being for Mercy's Sake

Evil serves goodness. Remember, where sin abounds, grace abounds more. That is scripture. What that means is, there is more grace in NYC (often called sin city) than in the cities of "righteousness" out west. Remember, Christ said it would be better for those of Sodom than for those of Capernum who denied the Lord. Let the Holy Spirit reveal what that means.


The man who exalts himself above the Lord,
Thinks that his will is uncontrolled and free.
But he is background noise, cacaphonous chords
That Satan strikes on lyres for all to see.
Such man's convinced decisions are his own,
Convinced his thoughts are his as are his friends.
His mind so vapid not know the unknown
That he's strung-up, a puppet for Satan's ends.
Before the Lord brings Light, Sins' slaves we toil
As slaves of Satan chained and bondaged, bound.
At God's appointing we see we're despoiled
But God's ordained such torment 'til we're found.
So understand, our life is not our own.
His opposite sides imbue His merciful throne.
Posted by Carole Di Tosti at 11:09 AM 2 comments:

Agape (In C.S. Lewis' Discussion of Four Loves-Agape is greatest)

In C.S. Lewis' brilliant The Four Loves the author discusses the greatest of love, agape which is Christ's love. First, it is a spiritual, divine and all-encompassing love. It is given freely with no expectation of return. For those unfamiliar with Christ's love or for those who are just beginning to understand the depth of it, it seems impossible to bestow. This is the "turn the other cheek love." Turning the other cheek requires superhuman effort, divinely inspired; in fact it is impossible unless one is in Christ's spirit and renewing one's mind in the Word daily.

From the perspective of one on the receiving end, if they are not in Christ's spiritual adulthood, often they do not realize what it is. How can they without God's wisdom of understanding at that adult level? Such love is incomprehensible to the human mind. All manner of twisting and distortion occurs about it until finally the anointing breaks through (probably years later) and the understanding comes to the one on the receiving end. Most likely, the individual giving the agape and the "receptor" have long gone to other spheres of influence. As the Word says:  the seed was planted, one came and watered, another tilled the soil around the plant, another provided the sustenance, etc.

This sonnet is representative of such agape love which is spiritual and never physical. The closest thing to the physicality of agape is feeling inner peace, warmth and forgiveness; it's power can send chills running up and down one's spine at its recognition and its presence. Being physical is so far beneath agape; it is mortal and selfish. It can indeed, kill agape love: objectify another's soul making it a nonentity (think what the Nazis did to eradicate self/identity in the concentration camps).

In human terms the closest thing would be to say agape is like platonic love. However, agape is much greater than that because it leads to redemption and renewal of the soul to Christ. Platonic love does not entail Christ, the anointing, the spiritual level of wisdom and faith.  Platonic love is mental and intellectual. Platonic love remains on a plane of logic. Agape defies logic. That's why it's impossible to understand, unless divine understanding is given to understand:  someone plants, someone waters, someone tills, someone gives sustenance, etc.   It takes time.


Oh Michael, Christ emboldened you with Love.
This Grace bestowed upon His chosen ones.
In hallowed sanctity of world's above
The carnal, worldly realms we surely shun.
And you, confounded, and perplexed, undone,
By that, you cannot seem to grasp or see,
Will learn in seasons ripe that you are One,
With Him in fullness of His unity.
A vessel or an ark, a ship, stalwart,
He's making of your soul to receive Him.
So don't throw off my Love* which fully starts
His process of your freedom from gross sin.
Just know this song of love envelopes you.
His love and mine are One with you in truth.

*agape love (no distortions please)
Posted by Carole Di Tosti at 11:58 AM No comments: