When Moses left the Israelites with Aaron to converse with God on Mount Sinai, their faith fled. Many grumbled and complained against Moses and the God who delivered them from Pharaoh's soldiers by parting the Red Sea in a fabulous miracle. They had forgotten how the Angel of Death destroyed the first born in Egypt (including their livestock) an unheard of example of His supernatural power that not even the magicians of Egypt could duplicate. Only God has the power of life and death.

Waiting for Moses to return from Mt. Sinai, the Israelites felt abandoned. They pooled their gold, had crafted a golden calf, a tangible idol that they said was God that they could see for the purpose of worship. Meanwhile, God had just given Moses the ten commandments. Knowing the Israelites defiled themselves by substituting an inanimate object for Himself, He told Moses he would wipe the tribes out. Moses, who interceded for the Israelites, convinced God to spare them. However, Moses regretted his intercession when he saw the Israelites cavorting and reveling before the golden calf. His ire was so great, he broke the commandments, destroyed the calf, ground it into powder which he threw into water and made the Israelites drink. Then, he had the Levites, who pledged allegiance to God, slaughter 3000 men that day as a sacrifice to expiate their corruption. (The movie version of the Ten Commandments is different from the King James version of the Bible.) The Qur'an version shows a more merciful God.
The scenes of Exodus foreshadow Moses as a type of Christ. Moses emerges as a compassionate negotiator for the souls of the Israelites. On the other hand, his anger against them for turning their back on God and preferring a material object they could see and touch as God, results in death. Moses' anger was a key fault that prevented him from entering into the Promised Land. Nevertheless, the symbolism of the calf is clear. God calls upon his adherents to worship by faith. By obeying Moses, God's representative, they would thrive; if they were stiff-necked, rebellious, disobedient, their lack of faith would cause their downfall. Moses' word and relationship with God was perfect. But he was an imperfect human being. Moses' anger against the Isrealites' doubt and rebelliousness on other occasions, was a flaw he could not overcome.
The most difficult experience for the Isrealites was having to trust Moses and live in the grace of God's miracles of remembrance. Materialistic, carnal, untrusting in their minds, their faith in God and Moses weakened, dimmed and died. The same abides for us today. When Christ said, "Blessed are they who believe and do not see," he was identifying the greatness of faith that depends not on the five senses, or the material realm or the physical world. Spiritual faith that is the substance of things hoped for, the evidence of things NOT SEEN is life fulfilling. It must be sought daily in the Word of God. The, the message-tie-in is clear. Worshiping, treasuring, material objects and the material realm bring misery, torment, unhappiness. And these emotions lead to self-destruction. Cupidity is a terrorist of the soul along with the lust of the eyes, the pride of life and the hungers of obsessive passion for people or things. Money, treasure, obsession never satisfies. Only spiritual wisdom brings peace and makes us whole. 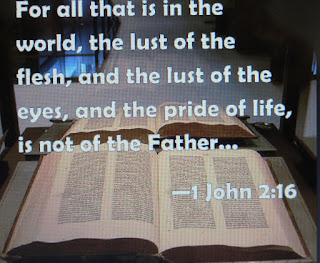 Those who are blind and deaf and dumb to God
His mighty acts unseen in dark-bloat lives,
Do manifest the lust of flesh and trod,
The seeds of Faith and Truth. His love denied.